50 Dance Forms in States of India 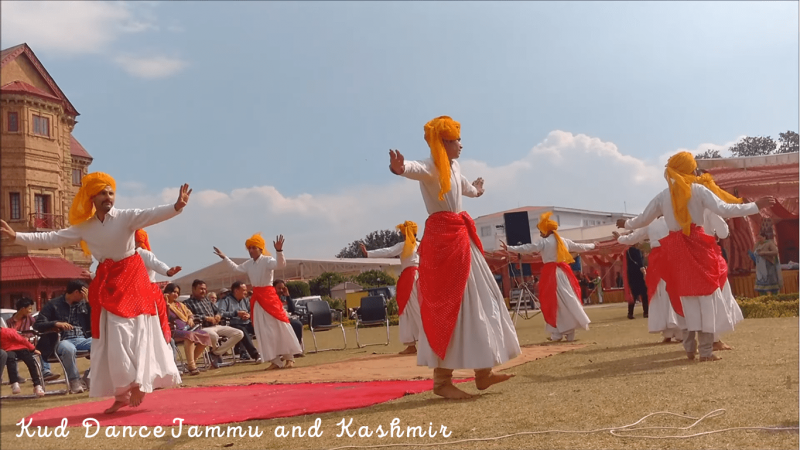 It is one of the most memorable dances performed in Jammu to honour the Gods as a thanksgiving ritual. The local farmers perform this dance frequently and people join from nearby villages in the celebrations. Everyone is in their best attire and dance through the night and honour in a festive spirit. It is performed by a group of 20-30 people.

This is the most prestigious dance form practised in Kashmir valley. The costume is very lovely with lively coloured robes and conical caps which are generally studded with beads.

Rouf is yet another traditional dance form of Kashmir which is recited on festive occasions like Eid and Ramzan usually presented by a group of women standing face to face each other.

It is basically performed in Chamba district in Himachal. This dance form is also performed at the time of celebrations.

This dance form is functioned by the ladies of Chamba in festivals wearing ethnic clothes or jewellery. 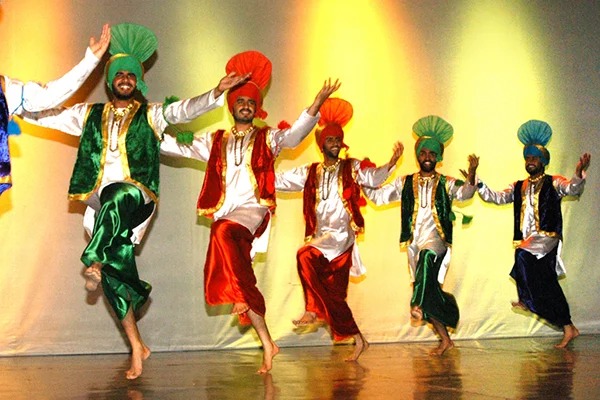 It is one of the most familiar dances of Punjab performed during Baisakhi only by the men in Punjab. Bhangra is performed on the drum beats and on Punjabi ‘bolis’, words such as hoay, hoay; or Balle, Balle, which not only inspire themselves but also others for the dance. People from all social classes join the dance.

This dance form is happiness for men, so performed only by men. Jhummar is performed mostly during the melas, weddings and other major functions and celebrations. 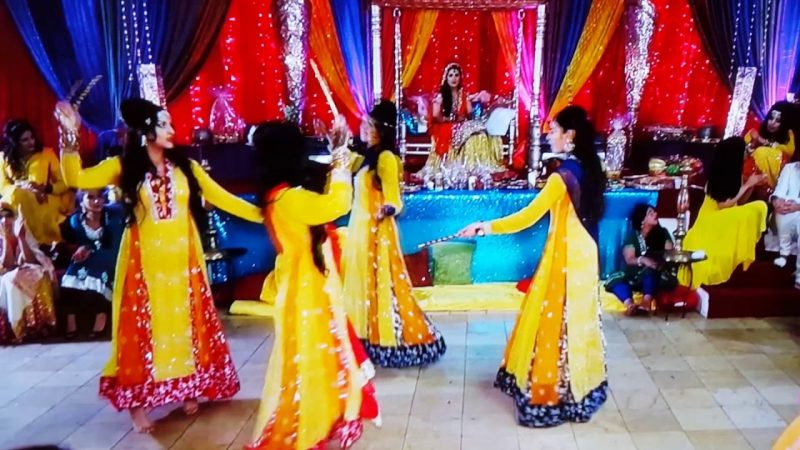 Luddi Dance is also a male folk dance of Punjab and it is celebrated as a success that is gained in any field. This is truly the dance of slow movements and is similar to bhangra.

Dhumall Dance is a form of a folk dance but has not been able to achieve the popularity of Bhangra. It is a male dance and, likewise,e it is danced in a circle on the drum beats.

This form is also called the Gaatka dance. This form is often performed in a marriage celebration. 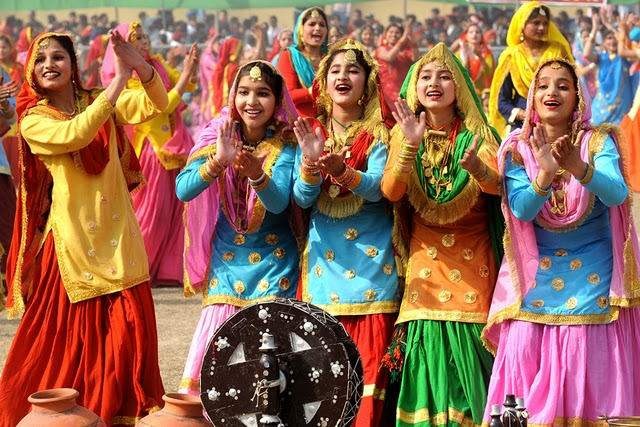 It is founded from West Punjab. This dance form is acquired from the ancient style of ring dancing.

The tribal inhabitants of Punjab perform the Sammi Dance, which is popular in Sandalbar, which now is in Pakistan.

This dance form is generally recommended within the young girls. The girls compose as they roll around with bright ‘orhnis’ or ‘daupttas’ streaming from their heads and their anklets present tinkling melodies. 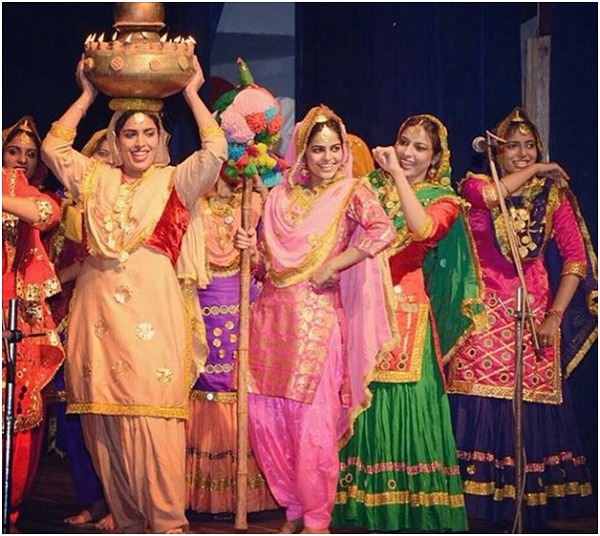 This folk dance is presented on the night before the wedding, the female relatives of the bridegroom prepare a ‘Jaago’.girls dance through the village streets carrying a pot (gaggar) adorned with lightened candles and composing jaagu songs.

This dance is a grass-roots dance form in Dehradun district. The folk dance is conducted on the eve of some religious festivals. Both boys and girls take part in the dance and are dressed in colourful traditional costumes.

This is an association dance of Bageshwar District in Kumaon. Both the men and women dance in a semi-circular structure.

This dance form is executed by couples with the female leading a mirror in her left hand and a colored handkerchief in the other. The male performs a Hurka, Manjira, and Flute. The dance form is a duet that describes the joys of romance.

The Chholiya Dance has its origins in the warring Khasiya Kingdom of Khasdesh, When marriages were performed at the point of the swords. 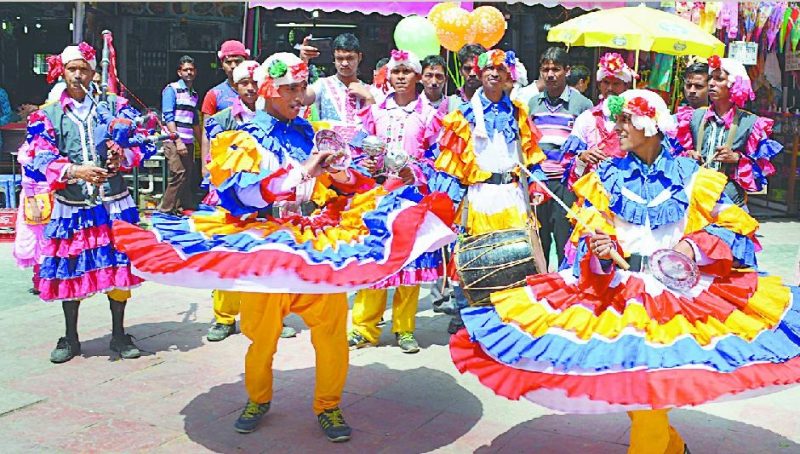 Keeping the old tradition alive, the Rajputs dance this at their marriages as a part of the marriage procession itself, led by the male dancers who go on dancing till they relinquish the bride’s house.

This form falls in the category of spirit and religious worship, in the form of a folk song or at times blended with dances. Sometimes, Jaggar may also be in the practice of Puja folk songs and are sung in .honour of the various gods and goddesses.

It is danced at fairs to the harmony, of singing that grows with the dance. This dance form is performed both in the morning or evening, they are danced at the coming of spring, mostly at fairs, but also to celebrate weddings.This is a community dance to throw away all the boundaries ofthe cast.

This is an acrobatic dance and is presented by the men populace only. In this dance, a large bamboo pole is arranged at a place. The dancer-acrobat rises to the top of this pole and then balances himself on his stomach on the top. This dance is celebrated in the Tehri Garhwal region. 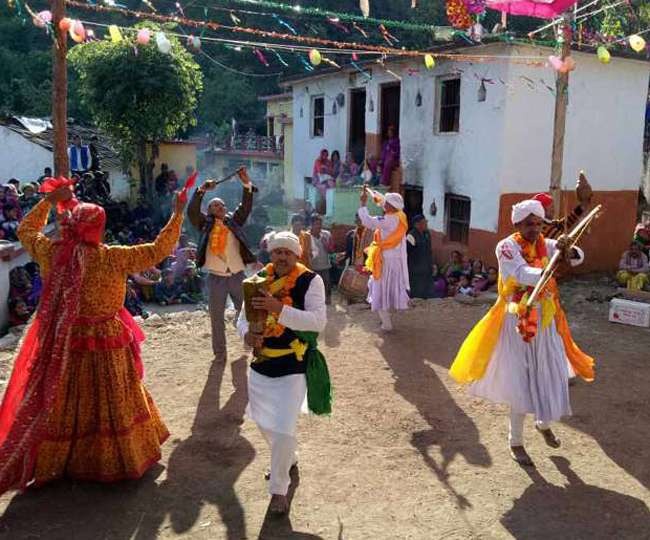 This dance form is very prominent in Garhwal region, which is related to the story of the Mahabharata.. Pandavas Nritya is nothing but a simple description of the story of the Mahabharata in the form of dance and music. It is mostly portrayed on the occasion of ‘Dussehra’ and Diwali. Pandavas Nritya is popular in Chamoli district and Pauri Garhwal. 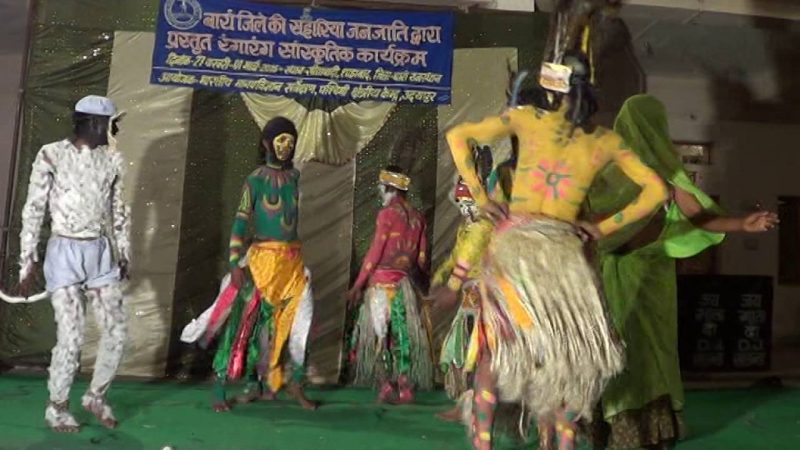 It is a traditional dance form of Haryana, reflecting its history in a true sense. A group involving in even numbers such as ten or twelve persons performs it. The dance is mainly showing religious stories and folk tales that are performed in unrestricted places and can last for 5 hours. Some of the male participants dress as women to perform the female casting in dance.

This dance is a collective form of a variety of the Jhumar dance style & steps. Women perform this dance solely. It is popular in the central region of Haryana, and is correlated with the daily affairs of the people and with the most prestigious events like the harvest, agricultural work, etc. This is performed by men and women carrying manjiras. 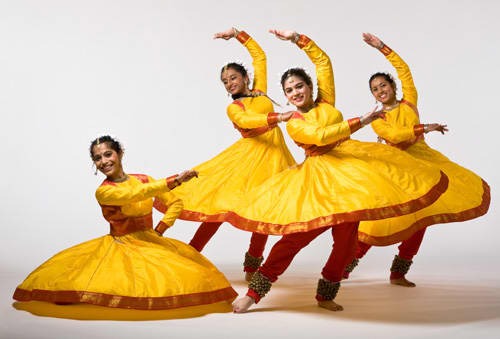 This dance form trace back to Hindu text ‘Natya Shastra’. Its originated from traces of temples and ritual dances. 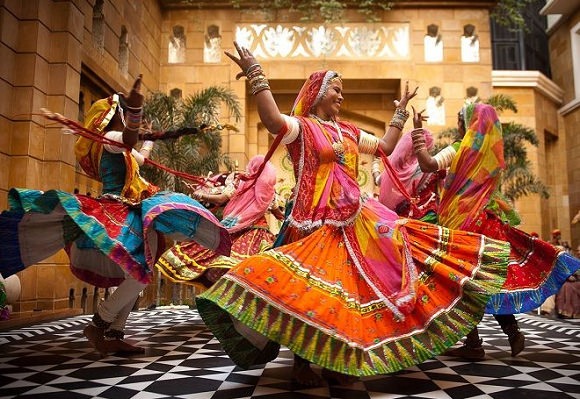 It is usually performed by the women of the house, out for showing the love bonds for their men. This dance form of Jaisalmer has gained international recognition.

Rajasthan is important for the puppet-playing tradition. String puppets are used in these forms and executed with hands to show their movements.

This dance form is introduced in the state of Gujarat. The name arises from the Sanskrit term Garbha (“womb”) conducted during Navratri. The dance expresses that God, in feminine form in Garba, is the only constant in a constantly changing world.It is usually performed before Aarti in the honor of the Goddess. 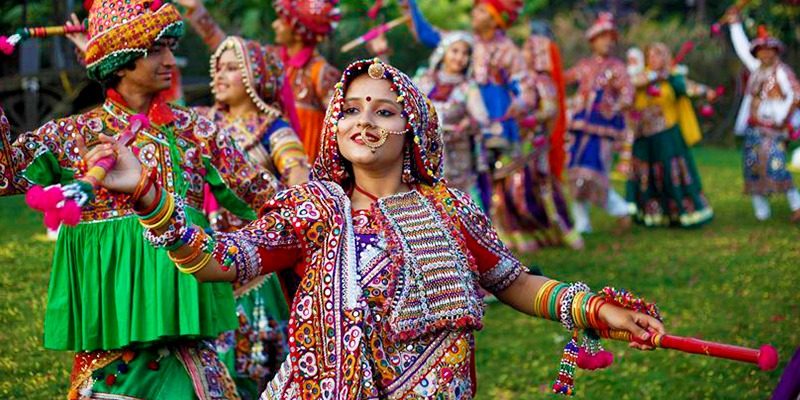 It is the most common folk dance of Gujarat. It stages a fight between the Goddess Durga and Mahishasura, the mighty demon-king. Dandiya is achieved after Garba as a part of the celebration. 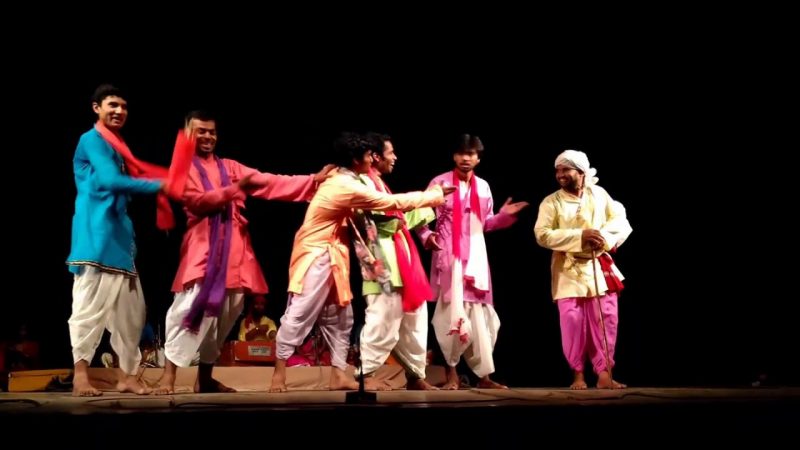 It is a case based dance on some features of social evils like child marriage. It has components of drama introduced in the dance. In it, female roles are played by male actors. 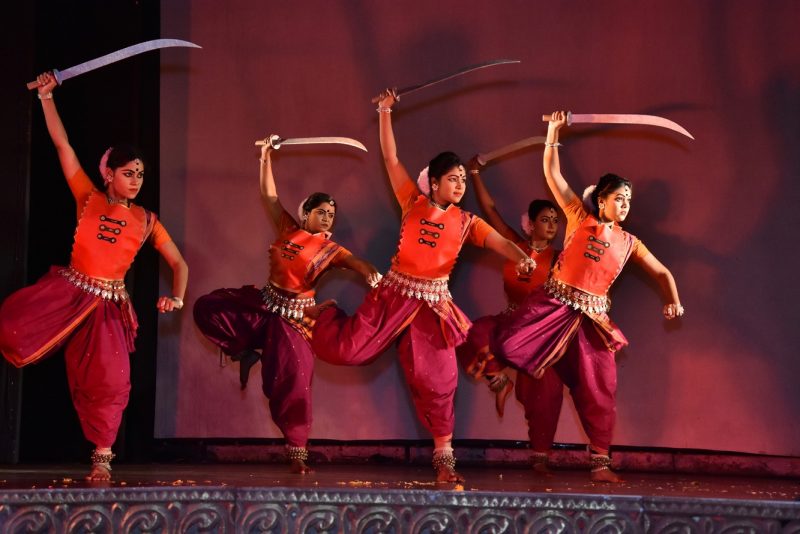 In Paika martial art is fixed with some other dance forms that is why it is only performed by the male actors. In it sword is used in one hand and shield in the other. It is performed for welcoming guests in various functions. 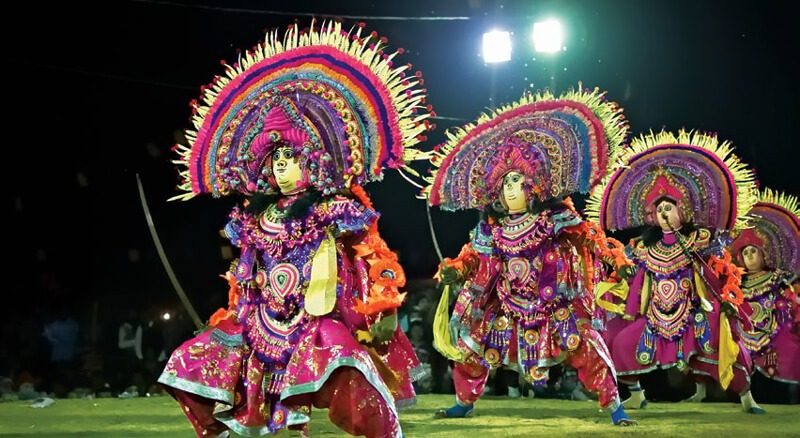 It is one of the most renowned tribal dance forms of India. It is originated in Purulia district in Bengal.

This dance form compliments the beautiful culture of the state by their colourfulness and festivity. Its is the devotional dance form of te state.

This is the dance form of the Santhal tribe found in Bengal. Its members are basically te devotees of Thakurji. 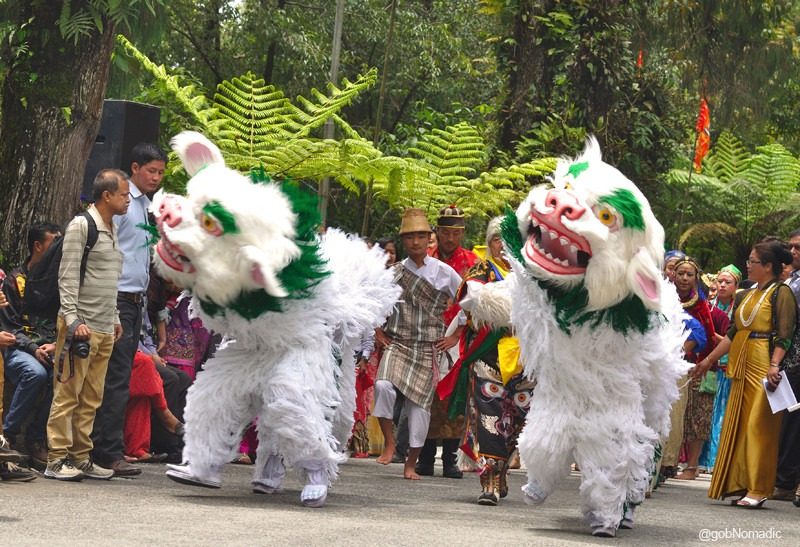 It is the traditional dance form which is also known as the Snow Lion dance. Actually, the associate five peaks of the sacred Mount Kanchenjunga forms a snow lion which is an important cultural symbol of the state. The snow lion is depicted in this dance form of Singhi Chaam. 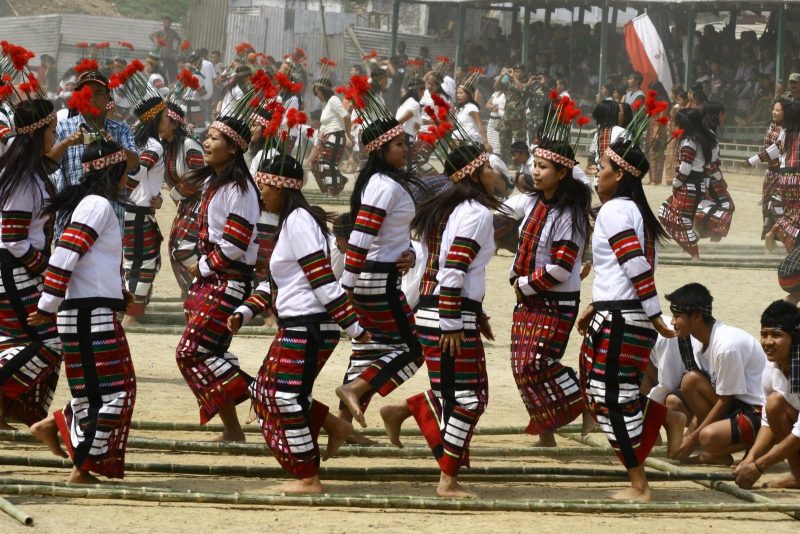 This is a major dance form loved by the Mizo people and verbally it is referred to as bamboo dance. They use long bamboo sticks to perform this dance. The dance form involves rhythm and absolute precision. Girls wearing colourful costumes step out and in between the bamboo beats. The clapping of these bamboos generates a sound which serves as core rhythm of Cheraw dance.

The dance form called Chheih Lam is performed in accompaniment with rice beer. It is performed to denote completion of a day’s work. This dance symbolizes the spirit of exhilaration and joy. The dance is performed with a song which is sung with bamboo tube and drum beats. The dancer is surrounded by people sitting in a circle around him. 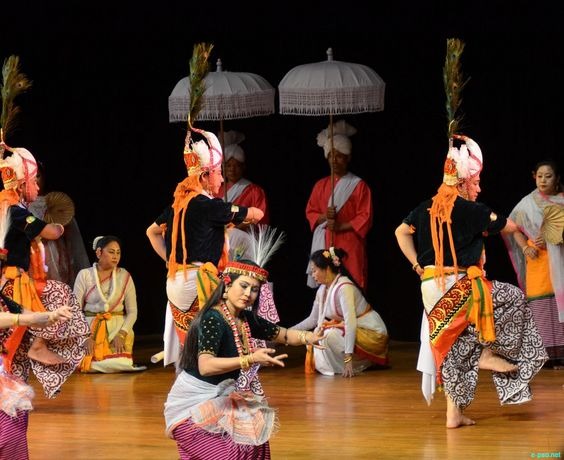 It is also known as Jagoi, is one of the major Indian classical dance forms, named after the region of its origin. This dance is also performed to themes related to Shaivism, Shaktism and regional deities such as Umang Lai during Lai. 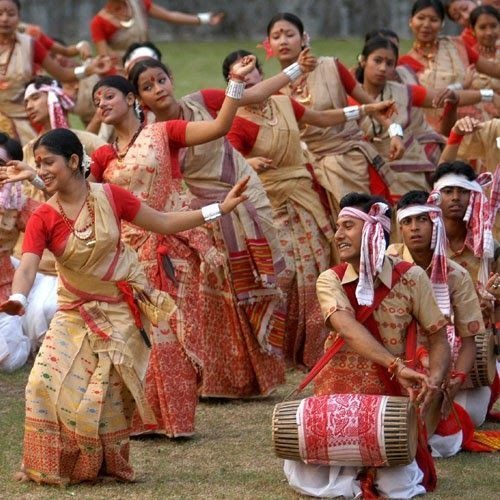 It is a group dance where males and females dance together. It is performed to traditional bihu music. done to express  to express the desire to feel both pain and happiness.

It is a traditional dance form of “Adivasi” or Tea tribes community of Assam. The dance is performed by young girls. 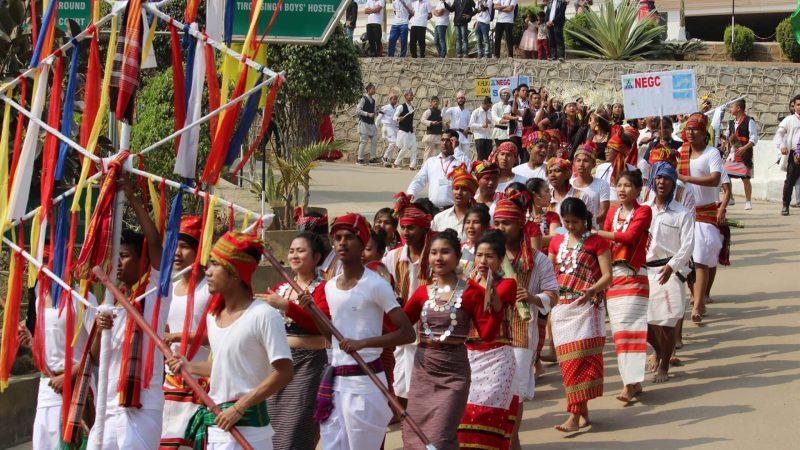 This dance form is celebrated at the time of ‘Garia Puja’ which continues for seven days in the worship of their beloved deity. 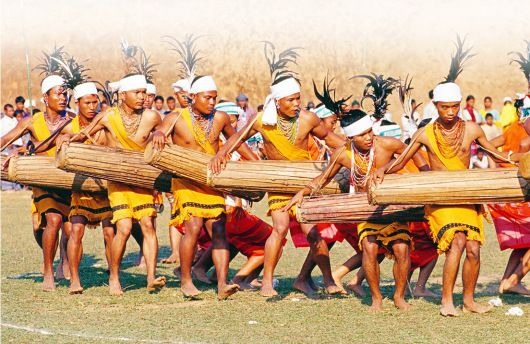 It is the most popular dance form of the state. It is generally performed during the harvest festival. Both married and unmarried girls and boys perform it. 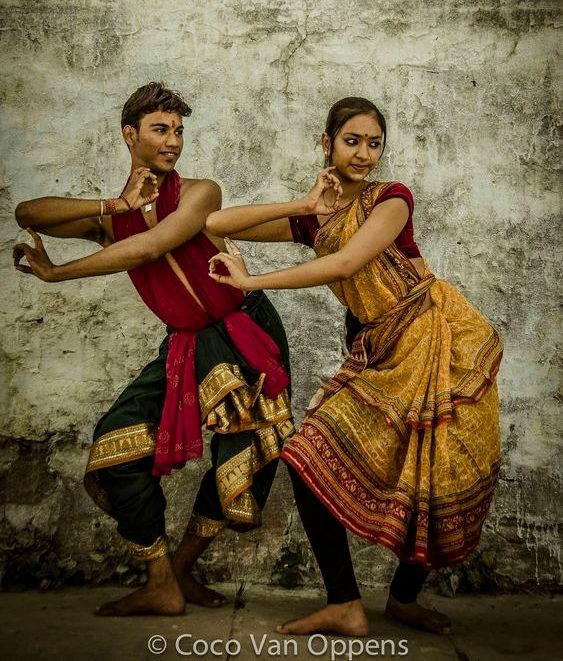 It is performed predominantly by women. It is a dance-drama genre of performance art, where the artist(s) and musicians play out a mythical story, a spiritual message or devotional poem. 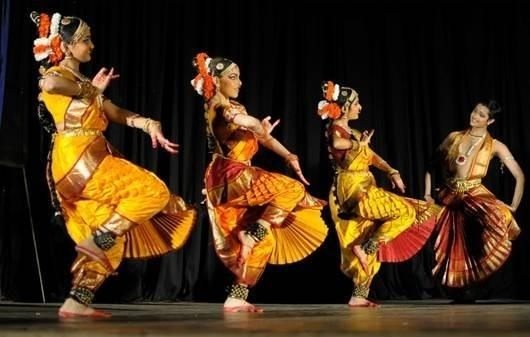 It is one of the eight major classical dance forms of India. It is in the form of dance drama which mainly created awareness of the evil power that existed in the world. 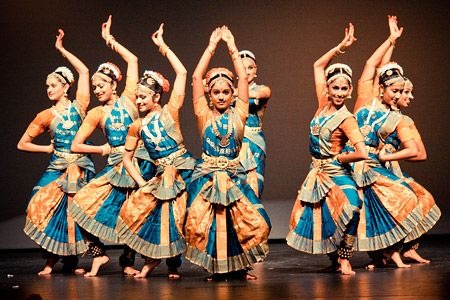 It is a solo dance performed by South Indian women which expresses their religion. The costume for this form is silk saree with gold zari embroidery design

This dance form depicts a story, it is presented in the form of story play. This dance form witnesses colourful makeup, costumes and face masks that the traditional male actor-dancers wear. It is originated 500 years ago, is a combination of dance and drama.

This is the popular dance form of the state got popular during the Chera reign from 9th to 12th century. It has a wonderful costume, fabulous jewellery and alluring make the culture representing of Kerala. It is very popular for a graceful symphony of the hips and eye movements. 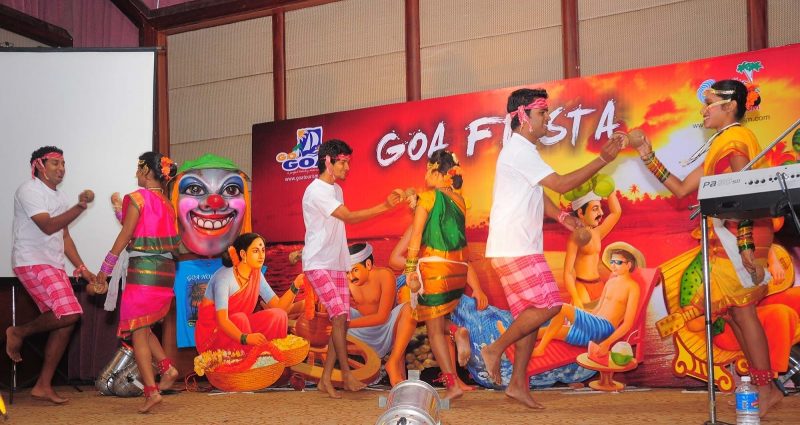 This dance is performed in the Konkan region of Goa. It is an important art form as it was contrived so that women can take a break from their daily routine. It is usually delivered in August and September. It requires women dancers forming circles or rows. The dance starts at a slow pace and gains momentum gradually.

It is a popular folk dance from Goa. It is completed in the month of Pousha (a month in the Hindu calendar) just before the arrival of winter. This dance form serves as a prayer as women perform it hoping that it would bring happiness and good health to their family members, especially their husbands.